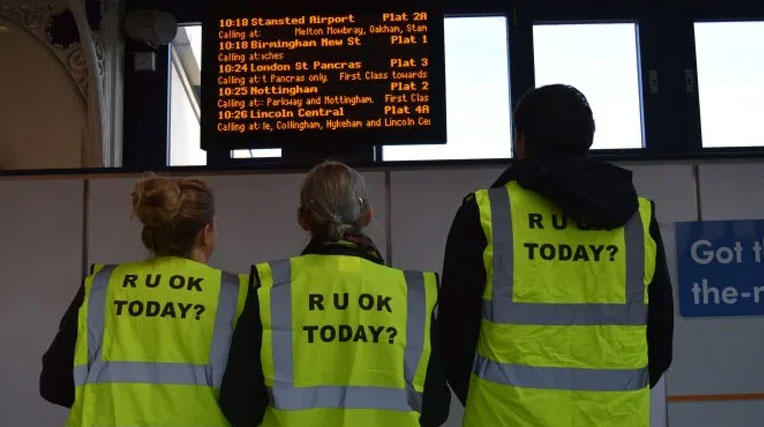 Police officers and staff are working with Leicester Partnership NHS Trust and other agencies at Leicester train station today (Thursday 10 October) to ask commuters if they “are OK?” during World Mental Health Day.

The RUOK? initiative aims to support mental wellbeing and engage people in a short conversation to show how small acts, such as a friendly word, question or gesture can help lift someone’s mood.

An area in the station has also been cordoned off with trained mental health specialists on hand for anyone who wants to talk or needs extra support.

The initiative first launched in Leicester in 2015 and was born out of a conversation between colleagues from British Transport Police and Leicestershire Partnership NHS Trust.

For the first time this year the initiative has been extended and services across other forces areas will also be stationed at Sheffield, Nottingham, Derby and London St. Pancras.

As set by the World Federation for Mental Health, the theme for this year’s awareness day is suicide prevention.

Barney Thorne, the force’s Safeguarding Partnership Manager and lead for suicide prevention, is at the station today.

He said: “Are you OK? Is a really simple question, but for many, that initial social leap to say ‘Hi’ makes us feel awkward. We’re spending one day doing that but in reality it’s something we could all do all the time, we’ve got specialist support on site, in case someone does answer no. This is an initiative that shows we’re all together to protect and look after our communities here in Leicester, Leicestershire and Rutland.”

Matthew Wakely, mental health service lead for Leicestershire Partnership NHS Trust and event co-ordinator, said: “Asking someone ‘are you OK?’ is such an easy thing to do. It’s a simple act that can have a massive impact on someone’s mental wellbeing. We’ll be asking the question on the day and encouraging people to think about the small things they can do – from a text or a smile to a conversation or just a hand on the shoulder – to lift someone else’s mood.”

He added: “We’re delighted that Network Rail and East Midlands Railway are taking the successful approach we have pioneered in Leicestershire and Rutland and spreading the message across their network. It means that thousands more people can be made aware that, in 30 seconds, any one of us can help a friend, colleague or loved one by asking them how they are feeling, being there to support them or helping them find other sources of support.“

Neil Grabham, customer experience director for East Midlands Railway, said: “We have around 28 million passengers travelling through our stations annually and by having volunteers offering support, we are creating more awareness and hopefully reaching out to hundreds of people who may need help.”